The Book of Lies

THE SUBLIME AND SUPREME SEPTENARY IN ITS MATURE MAGICAL MANIFESTATION THROUGH MATTER: AS IT IS WRITTEN: AN HE-GOAT ALSO 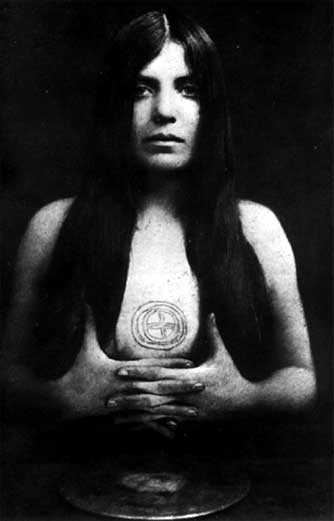 77 is the number of Laylah (LAILAH), to whom this chapter is wholly devoted.

The first section of the title is an analysis of 77 considered as a mystic number.

Through matter, because 77 is written in Hebrew Ayin Zayin (OZ), and He-Goat, the symbol of matter, Capricornus, the Devil of the Tarot; which is the picture of the Goat of the Sabbath upon an altar, worshipped by two other devils, male and female.

As will be seen from the photogravure inserted opposite this chapter, Laylah is herself not devoid of "Devil", but, as she habitually remarks, on being addressed in terms implying this fact, "It's nice to be a devil when you're one like me."

The text need no comment, but it will be noticed that it is much shorter than the title.

Now, the Devil of the Tarot is the Phallus, the Redeemer, and Laylah symbolises redemption to Frater P. The number 77, also, interpreted as in the title, is the redeeming force.

The ratio of the length of title and text is the key to the true meaning of the chapter, which is, that Redemption is really as simple as it appears complex, that the names (or veils) of truth are obscure and many, the Truth itself plain and one; but that the latter must be reached through the former. This chapter is therefore an apology, were one needed, for the Book of Lies itself. In these few simple words, it explains the necessity of the book, and offers it — humbly, yet with confidence — as a means of redemption to the world of sorrowing men.

The name with full-stops: L.A.Y.L.A.H. represents an analysis of the name, which may be left to the ingenium of the advanced practicus (see photograph).